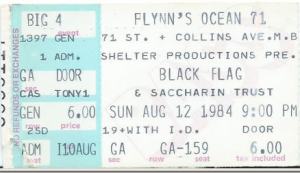 Back in 1984, I was working as a line cook in Miami at one of those TGI Fridays type of places that later went out of business. There was a young woman who worked there named Kim who was very much into the punk scene, hence her nickname “Punk Rock Kimmie.” One day she came up to me and punched me in the arm and said, “Hey Jeff. Wanna go see Black Flag?”

My response: “Umm. I dunno. What songs do they play?”

Kim: “I dunno, but they smash bottles on the stage and roll around in the broken glass.”

The show was at Flynn’s on Miami Beach, a true hole in the wall. This place was run down, dirty, dismal, and dangerous—essentially everything you would expect from a hardcore punk bar. I confess I felt nervous around all the skinheads who packed the small venue.

Saccharin Trust was the opening act, but I cannot tell you much about their performance. I was much more focused on the environment and the people there. But Black Flag I remember well.

They came out and it was nothing short of chaos. The mob of angry youths slamming was a bit intense, but I found a safe spot and observed the madness from outside the fray. Henry Rollins, the lead singer, stalked the stage in nothing but shorts, gym socks, and sneakers, screaming viciously into the microphone and spurring the already frenzied crowd. Sweat poured off of him and I remember thinking that he had way too much energy for a single human being. But the encore is what stands out the most for me.

After the high-energy performance, the band was called back on stage. Rollins, drenched with sweat, kicked off a sneaker and pulled off one of his socks. He squeezed the sock sweat into a glass and then drank it. Then he removed his other sock and squeezed it over the crowd. I watched with morbid fascination while fans stood there, mouths open, as sock sweat was squeezed into their mouths. The thought that crossed my mind: Some people will drink anything.