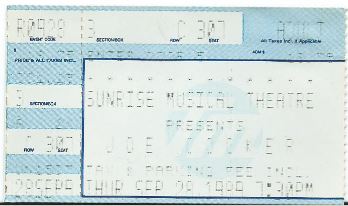 I feel very fortunate to have gotten to see the late Joe Cocker. He was an amazing performer and someone who poured his entire soul into his vocals.

Going to this show was sort of a surprise. It was not on my agenda of concerts to attend. But a close friend of mine, Lydia, was working in the record business at the time. She called me up and said she could get some free tickets to see Joe Cocker and would I like to go with her. I could not pass up on that offer.

The seats were great—third row! And the Sunrise Musical Theater was a small venue to begin with, so regardless of where you sat, it was still great. But being up close, seeing the facial expressions as Joe reached deep inside to tap into the heart of his emotion as he sang was something I remember to this day.

He performed all his hits, as well as songs that I was not familiar with. When the show was over, I could not think of a single song that I had wanted to hear that he had not played. It was a totally satisfying and enjoyable concert that left nothing to be desired.

I want to say thanks again to Lydia, who I am still friends with. Thanks for treating me to a concert that I will always remember.