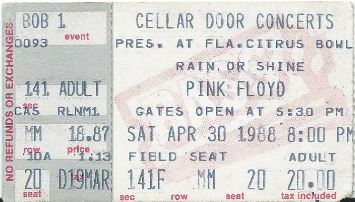 I was living in Miami at this time, but thought nothing of taking a road trip up to Orlando to catch Pink Floyd. A group of us decided to carpool up there together, which led to a problem. I was playing music with a guy named Mitch, who was along for the ride. We stopped at a convenience store for refreshments, and unbeknownst to everyone else, Mitch got in to an argument with the cashier and walked out of the store without paying. The cashier got the license plate and filed a police report. A few weeks after the concert, police contacted the owner of the car, who contacted me, and I passed a message on to Mitch to call the officer and straighten out the dispute. He failed to do so, and after more harassment, I finally provided his name to the police. Needless to say, that ended our musical collaboration.

Anyway, back to the concert.

We made it to the Citrus Bowl, and it was pouring like it can only pour in Florida. But it was not a warm spring Florida rain. Oh no! It was bitter cold. Everyone was huddled together, wearing trash bags, trying to keep warm. I recall shivering uncontrollably, my teeth literally chattering. If it were any band other than Pink Floyd, I would have walked out. And while the lasers looked really cool slicing through the rain, after a while, I didn’t even care.

As a musician, I could not help wondering about the safety of the band members, as well as the equipment. I for one would never want to let my guitar get wet like that. But David Gilmour did not seem to mind, although he did comment about how it always seems to rain in Florida when they perform there. Richard Wright, the keyboardist, was literally covered under a tent of tarps. It was kind of silly that when he was playing a solo, the lights just shone on this brownish mound of plastic.

Having seen Pink Floyd before in Miami, I have to say I was a little disappointed with this show. The set list was shorter, and noticeably missing was “Shine On You Crazy Diamond,” which was what they opened with in Miami. It felt like the band was miserable and just wanted to finish playing and get somewhere warm and dry.

After the concert, we all piled into a hotel room. There were a lot of us, so floor space and bathtub were utilized. Next morning, we headed back to Miami.