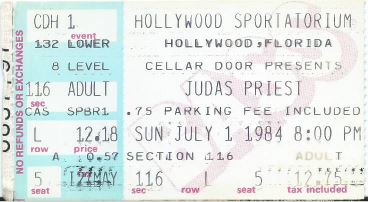 Judas Priest was one of those bands that I needed to acquire a taste for. A lot of my metal-head friends were die-hard Priest fanatics, but I was lukewarm towards them for a long time. I didn’t hate them, and I didn’t love them. I’d rock out when they came on the radio, but never bothered to buy any of their records. Anyway, when I saw they were coming to the Hollywood Sportatorium, I figured I might as well go and check them out, because there’s nothing quite like a good thrashing metal show, right?

The concert totally kicked ass. While there were a lot of songs I didn’t know, I knew enough to enjoy it, and the stage show was truly impressive. They were totally high-energy live, which is important. There is nothing worse than going to a concert where the band sounds like they would rather be watching TV in a hotel room. These guys wanted to be on stage, and it showed in ever scream and every shredding guitar solo. I left drenched in sweat after having completely rocked myself out.

Over the years, since this show, I’ve listened to more Judas Priest and definitely gained a deeper appreciation for their talent. I even downloaded some of their stuff on Apple Music. I have some fun memories now of driving with my kids and rocking out to “Breaking the Law.”

Here’s the setlist from the show. Rock on!