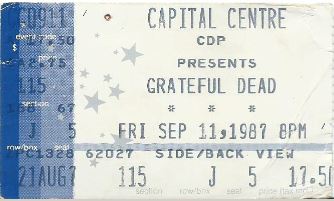 This concert marked my first deep dive into the Grateful Dead counter culture. While I had been listening to the Dead since the 70’s and had seen them numerous times prior to this, this marked the transition into lengthy travel to catch a long string of shows, as well as engaging in the sale of arts and crafts in the parking lot to offset the costs.

Three of us had decided to embark from Miami to catch three nights at the Capitol Centre in Maryland, followed by four nights at Madison Square Garden in NY. (The band was playing five nights at the Garden, but we could only manage four.) It would be me and my friends Julie and Miriam. In preparation, we spent long hours making beaded necklaces and woven bracelets to sell while on tour. Luckily, we were able to sell a fair amount prior to getting on the road, just at local concerts and events in Miami.

We took a flight from Miami up to the DC area (I forget which airport) and rented a car when we got there. Julie had also secured us a place to stay in Silver Spring near the venue with someone she knew (more on that fiasco in a subsequent post). I have a great memory of Julie helping herself to some little bottles of booze on the plane as the service cart was alongside our seats. We imbibed and enjoyed flying the friendly skies!

Upon arrival to the concert venue, we began our tour of the parking lot, hawking our beads. Julie was the ultimate salesperson. She somehow managed to lure dazed hippies our way who eagerly parted with their money in exchange for a strand of beads.

While we were wandering the rows of cars and campers, I noticed two people walking briskly toward us. It took me a moment to realize that it was my brother Mike and our friend Jon. Unbeknownst to me, they drove up from Gainesville, Florida for the shows, intending to surprise me. After some warm embraces, we spent the rest of the afternoon hanging out together and catching up. Already, it was feeling magical.

Despite the festive mood, there was an undercurrent of tension that was palpable. By this time, the merry band of intrepid deadheads had swelled in number and authorities in cities where on high alert. Prince George’s County’s finest were certainly out in force, and before the three-day stint was over, there would be problems.

But that is another stub and another story. For this show, we went inside without any problem, found some seats together, and danced our asses off. It was also Mickey Hart’s birthday, which made it even more special.

Here is the setlist. Check back soon for my memories of the second night.