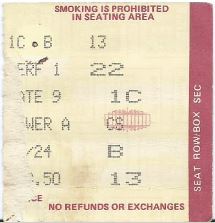 The day after the third Dead show at the Capitol Centre was a travel day. So me and my friends, Julie and Miriam, packed up our stuff and boarded a train from D.C. to New York City, ready to see another four shows at Madison Square Garden. The band was playing five nights, but we were heading back to Miami after the fourth night. We had lives we needed to get back to.

We passed the time on the train ride creatively, making woven bracelets to sell outside the Garden. Cash was already running low, so we had to generate a little income, if possible.

We arrived in NYC and were supposed to meet my brother who was living in Jersey City at the time. He was working, so we had some time to kill. The three of us sat on the sidewalk and leaned against a tall building, feeling somewhat frazzled. We must have looked even worse than we felt, because some older gentleman who was walking past reached into his pocket and tossed us a small stack of bills, then kept walking. We were taken aback, to say the least, but grateful for the extra cash. We added it to the communal funds.

Later, we met my brother and took the bus from the Port Authority to Jersey City. He and his wife had a nice townhouse there, so we basked in the comfort.

The next day, rested and refreshed, we got instructions from my brother how to get into the city and how to get back home afterwards, then headed out for the first of the Garden shows. When we got to MSG, we were greeted by swarms of tie-dyed freaks crowding the sidewalks as business people in charcoal suits zig-zagged through the sea of color. Looming over the entrance to the Garden was a giant inflatable King Kong, sporting a tie-dye shirt. It was quite the spectacle.

Upon entering the Garden, I got somewhat annoyed that the ticket taker gave me such a crappy ticket stub. I even asked if he could give me the part with the band’s name on it, but he rudely refused. Not much I could do about it.

We got inside and found our seats. The Garden is massive, but after the uncomfortable experiences at the Cap Centre, it felt safe and pleasant. A much better vibe, right off the bat.

The show was solid, and Brent got things rockin’ right off the bat with a great version of “Hey Pocky Way.” Second set was really fun, and “Gimme Some Lovin’” echoed how I was feeling—so glad I made it! “Baby Blue” encore was a sweet way to end the night.

Catching the bus back to Jersey was uneventful, although there was no shortage of strange folk lurking around the Port Authority. But we caught our bus, made it to my brother’s, and wound down the evening.