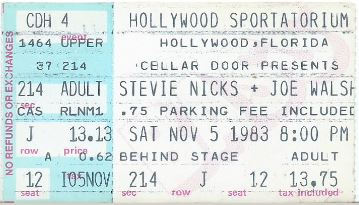 This was a pretty cool double bill, and it was during that period in the 80s when Stevie Nicks was enjoying a solid solo career. It was part of the Wild Heart tour.

We had seats behind the stage, but it was the Sportatorium in the 80s, so essentially you went and sat wherever you wanted (unless someone bigger than you with a ticket claimed the seat). We managed to secure some seats about halfway back on the side, which were decent.

Joe Walsh opened the show, and he was wasted. He slurred his words and was pretty sloppy. This would not be the only time I would see Walsh trashed on stage. He earned his reputation as a lush.

After a break, Stevie came out. She had a tent set up on stage, and I would soon discover what the tent was for. Frequently, between songs, she would go off into the tent, and after a while, come back out wearing a new dress. I don’t mind a couple costume changes, but she was definitely taking advantage. In addition, she would take what seemed like an unusually long time to change her outfit. I couldn’t help wondering if she was powdering her nose also while in there, so to speak.

In spite of the drunkenness and the interminable breaks between songs, it was still a good show. Here are the respective setlists.