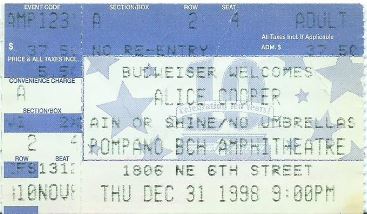 What better way to rock in the New Year than with Alice Cooper, right? But wait – it gets even better. So the ticket says Row 2, which I have to say, I was pretty psyched about. But when my friend Jim and I arrived at the show, lo and behold, Row 2 was actually front row! So even though we were off on the side, we were still deep in the madness and mayhem, and we were graced by Alice’s presence when he slunk over to our side of the stage.

The theme of this show was kind of a psycho-circus motif. There were demented clowns providing Alice with his various implements of destruction, and just grinning menacingly like something out of a Stephen King novel.

There were some nice surprises in this show, notably “Public Animal #9,” a classic from the School’s Out album, and “Unfinished Sweet,” where the clowns shoved Alice into an Egyptian sarcophagus and skewered him with swords. Also, Alice made a nod to Elvis, one of his influences, by playing “Jailhouse Rock” for an encore, decked out in a sequined jacket and some fly shades.

There were so many high points at this show, it was basically just one long high point. From the first chords of “Hello Hooray” until the last note of “Under My Wheels,” it was all Killer and no filler.

Here’s the full setlist. Rock on!