This ticket was for admission to an art installation by Brian Eno which was part of MoogFest in Asheville, NC. For those of you who are unfamiliar with Eno, he “is an English musician, record producer, visual artist, and theorist best known for his pioneering work in ambient music and contributions to rock, pop and electronica. A self-described “non-musician”, Eno has helped introduce unique conceptual approaches and recording techniques to contemporary music. He has been described as one of popular music’s most influential and innovative figures.” (Source: Wikipedia)

The concept of the art installation is a combination of visual images and ambient music generated through software to create a continually morphing experience. “The title is derived from the possible number of combinations of video and music which can be generated by the software, effectively ensuring that the same image/soundscape is never played twice.” (Source: Wikipedia)

Anyway, MoogFest was a weekend-long electronic music festival, and this year I was doing the full festival (more on that soon). I decided to check out the art installation, to get myself in the proper mental-state-of-being for three days of mind-expanding music. And this definitely did that. I spent a fair amount of time basking in the sights and sounds that can only be described as consciousness-altering. After that, I was primed and ready to indulge myself into the rest of the festival.

This is one of those things that needs to be experienced. Words fail to adequately convey what it was like. As such, here is a link to a 7-minute sliver of Eno’s multimedia masterpiece on YouTube. Check it out. Headphones recommended. 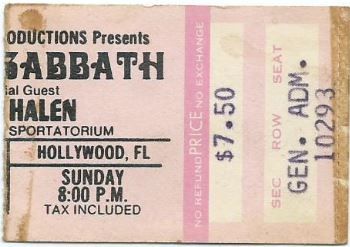 Since this concert was back in the 70’s, the details have become a little foggy. What I remember the most about this was the sheer excitement of seeing Black Sabbath in concert. I remember going to a yard sale with my mom as a young kid and looking through a bin of albums, then discovering Black Sabbath’s “Paranoid,” which I bought for a quarter and wore out on my turntable. I would sit with the album cover opened, staring at the black and white photo of the band inside, and thinking how cool they were. So getting to see Sabbath, as a young teenager, was a big deal for me.

Van Halen was the opening act. I would see Van Halen other times afterwards, and they were never as good as this time. I remember being impressed with their energy on stage. They were young, hot, and bursting with rock and roll vibrancy.

As far as Sabbath goes, I recall the eerie effects of the stage bathed in rich hues of lighting. I remember Ozzy, summoning the crowd with his vocals while Tony Iommi unleashed thunderous sounds on his SG. I also, sadly, remember someone falling from the rafters. At the Sporto, people would climb across the metal beams on the ceiling to attempt to get a better view. One unfortunate soul lost his grip that night.

I wish I could recall more details, but alas, all I have is the ticket stub and the deep feeling that I had a really great time at this concert. And hey, music is all about the feeling, right?