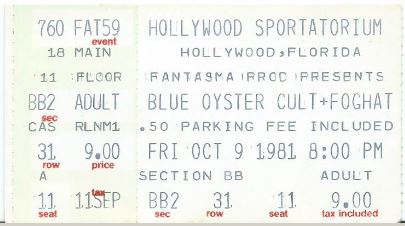 Here is why it was so cool growing up in the 70s and 80s. A great triple bill for a whopping $9.00! Even though I had seen Blue Oyster Cult earlier in 1981 with Heart, I could not pass up on this one.

First to play was Whitford/St. Holmes, a band comprised of Brad Whitford from Aerosmith and Derek St. Holmes from Ted Nugent’s band. This was one of those moments in rock history, where I had the chance to see a band that really was not around very long, but was very cool.

Next up was Foghat, and if memory serves me well, this was the first time I saw them. I admit I was into Foghat as a teenager, so seeing them live was a big deal for me (I would see them more times than I care to admit afterwards). They played a short, tight set that included all their hits, and the generally intolerant Sportatorium crowd was appreciative.

Then came BOC. As always, they were nothing short of excellent. This was the Fire of Unknown Origin tour, which was definitely a high point in the band’s career. I have some distinct memories from this performance, like the amazing version of “Godzilla” and “Roadhouse Blues” for the encore, at the end of which Buck Dharma systematically popped his guitar strings one by one during the closing solo, grasping and tearing the last string as the final note decayed. It was rock and roll at its finest.

So as I was researching this show online and I found the setlists for Foghat and BOC, I discovered something ultra-cool. It seems that “The Red &The Black”, “Joan Crawford”, “Burnin’ For You”, “Godzilla”, “Veterans of the Psychic Wars” and “E.T.I (Extra Terrestrial Intelligence)” were all recorded at this show and released on the Extraterrestrial Live album (here is track list on Wikipedia). Once this Shelter-in-Place restriction is lifted, I will definitely be scouring the record stores to get a copy of this.

Anyway, here are the setlists. Rock on!

Another year, and another Christmas Jam. This one was special for me because my wife and I took our older daughter, along with some of her friends. This was the only Christmas Jam that she attended with us, and I have great memories of how excited she and her friends were.

The lineup for this show was a little more eclectic than most jams. The main acts included:

In addition, there was a nice group of guest musicians who augmented the headliners.

Counting Crows was definitely cool. They did a cover of The Beatles’ “Golden Slumbers” medley, which was excellent. I also enjoyed Ani DiFranco. She is someone that I probably never would have paid to see by herself, but she was better than I expected. Glad to be able to check her off the list. William Bell was also really great. I wasn’t familiar with him, but was very impressed with his performance.

At one point, I took all the youngsters down onto the floor for a bit, while my wife held the seats. While on the floor, Brad Whitford joined some musicians on stage and did a cool version of “Last Child,” one of my fav songs from Aerosmith’s “Rocks” album. As we were cramped into the floor space, I noticed some older freak offering his pipe to one of the younger girls I was chaperoning. I caught his eye and gave him a look that basically said, “You’ll most regret doing that.” He heeded the silent warning and melted back into the sea of people.

As always, the show went on until the wee hours of the morning. I was not able to find all the setlists, but I found a few. Here are the ones I was able to locate. Rock on!