Edie Brickell was one of those artists that I liked right off the bat. She had that cool hippie chic vibe, and her guitarist was obviously influenced by Jerry Garcia. So I jumped at the opportunity to see her and her band at the Button South, which was one of the better music clubs in South Florida at the time.

There is not much to say about this show, other than it was really, really good. Edie’s vocals were so sweet, and the band was tight and energetic. They also tossed in some cool cover tunes by Bob Dylan and David Bowie. I guess if you are going to pick artists to cover, those are solid choices.

Which I had more to share, but it was just a good, fun concert, and I was glad that I got to see them in their prime.

This performance by Joan Jett was quite different from when I saw her open for The Who a year earlier. The Button South was a rock and roll nightclub, so it was much more intimate seeing her here as opposed to in a large stadium.

Don’t have a whole lot else to share about this show. I’ve seen Joan many times over the years, and this one kind of blends in with the remnants of memories from other performances. But I can say with certainty that she kicked ass, because she kicked ass every time I have seen her.

I love rock and roll…

My friend Jim asked me if I wanted to go to this show. “Hey man! Let’s go rockin’ with Dokken!” I have to say that this band was not even on my radar, but I figured, what the hell. Button South was usually a fun place to hang out, and I’ll go see just about any band once.

I did not know a single song that they played. My thoughts were – meh, they were an OK metal band. Not really my thing, but not the worst band I had seen. I know there are people out there that really like this band, and I have seen lots of praise on the various guitar email newsletters to which I subscribe, but personally, I just never saw the attraction. To me, they were just mediocre. Still, saw them and another band to check off the list.

So as you can see, not only do I have a ticket stub from the Ramones, but I have a guitar pick too! It’s kind of a crazy story, so here goes.

I kind of liked the Ramones, but my friend Jim was definitely into them and invited me to go. I figured I might as well check them out.

The Button South was one of the main South Florida rock clubs at the time, and the place was jam packed with rock and roll crazies. We made our way up to the front and waited for the show to start.

The Ramones exploded on the stage. They were high energy right from the first note, and Jim and I were almost directly in front of Johnny Ramone. They all looked strung out, especially Joey who was skinny with long hair, growling into the microphone. It was pure rock and roll! I also marveled at their equipment, which looked like crap. The cords were patched together with old electrical tape and the amps looked battered. I was surprised that they still produced sound.

Anyway, on to the story of “the pick.” There was a girl who was next to me who had her hands cupped, begging Johnny Ramone for a pick. He kept coming up to her, holding a pick just above her outstretched hands, and then tossing it out to another part of the crowd. This went on the entire show. This girl didn’t dance, didn’t move, just stood there, begging.  Finally, after the last song of the encore, Johnny drops a pick into her hands… and it bounced out and landed right in front of me. So, I picked it up and looked at it. Now, I was a dumb teenager, and all this girl had to do was flash me a sad look and the pick would have been in her hand. But no. She got in my face and started screaming at me, saying that the pick was meant for her. I looked her in the eye and said, “Well, you should have held onto it then,” and tucked the pick into my pocket.

Later on, I felt somewhat sorry. Regardless of the fact that she was nasty to me, I probably should have given her the pick. But I was young and stupid. And “hey ho,” I still have a Ramones guitar pick. 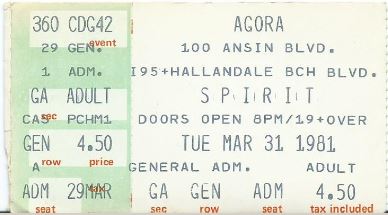 Spirit was one of those bands that the first time I heard them, I was floored. I had a friend named Paul and he was excited one day because he had just bought the Best of Spirit. We listened to it and the next day I went to the record store and bought a copy of the album. It basically lived on my turntable for weeks afterwards.

The Agora Ballroom was a club in Hallandale, Florida, which is just north of Miami. The club later became the infamous Button South, but when I went to see Spirit there, it was still the Agora.

Although the band only featured two of the original members, Randy California and Ed Cassidy, they were amazing. Randy’s guitar work and vocals were stellar and the band ripped through almost everything I wanted to hear. The only song that they didn’t play which I would have loved to see them perform was “Mechanical World,” a very dark, apocalyptic anti-war song.

Spirit was one of those bands that never became as popular as they should have. I like to say that they are the best band you’ve never heard of, although you’ve probably heard their songs, like “I Got A Line On You,” “Nature’s Way,” and “Fresh Garbage.” Also, it has been asserted that Jimmy Page stole the main musical theme for “Stairway to Heaven” from Spirit’s “Taurus.” (There is a lawsuit against Page seeking to give credit to Randy California for the song.)

If you’re not familiar with Spirit’s music, I strongly encourage you to check them out. “Twelve Dreams of Dr. Sardonicus” is one of my all-time favorite albums. They were so ahead of their time and their music sounds as fresh and exciting today as it did when I first heard them back in the late 70’s.

Anyone who has seen the Woodstock movie will undoubtedly remember Alvin Lee and 10 Years After’s smokin’ performance of “I’m Going Home.” For me as a guitarist, seeing that filmed performance was one of those inspiring moments that made me want to play guitar. So when I heard that Alvin Lee was coming to the Button South, a popular rock club in South Florida, I was determined to go.

I was living with a Latin woman at the time, so of course, she was coming to the concert with me. I thought it would be OK, since she did like rock and roll, but unfortunately, she did not appreciate Alvin Lee’s long and energetic guitar solos nearly as much as I did, and after they ended the first set with a 10-minute version of “I’m Going Home,” she was ready to leave and letting me know in no uncertain terms. I was annoyed, to say the least. So I had to decide what was more important, standing my ground and stubbornly demanding we stay for the second set, or going home and maintaining a sense of harmony at the abode. I opted for the second choice, placating myself by focusing on the fact that I got to see the song that I wanted to hear most of all.

Sadly, Alvin Lee is no longer with us (he passed in 2013), so the fact that I didn’t stay and catch the second set is one of those rock and roll regrets. But I did get to see him, and the one set that I saw certainly inspired me.