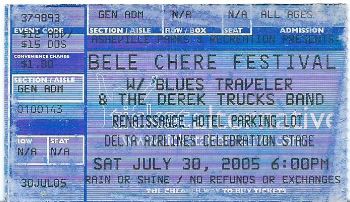 Bele Chere was an annual street fair that used to happen in downtown Asheville (the city stopped having it in 2013). They would close off the streets, and have artists, vendors, and stages set up for musicians. Generally, all the music was free, and over the years I saw some cool acts, like Cracker, Grace Potter, the Old 97s, and Southern Culture on the Skids.

Anyway, in 2005, the powers that be decided to try adding a “paid” performance to the festival. This pissed off a lot of purists who felt that all the music should be free, but I didn’t mind paying the $15. I figured it was worth it to see two bands, and I have never seen Blues Traveler before, so I figured it would be worth checking them off the list.

Derek Trucks Band opened the show, and as always, he was tremendous on the guitar. He played a nice long set that included Count M’Butu sitting in on the congas, and Susan Tedeschi joined him on stage for a song, which was cool.

Afterwards, Blues Traveler took the stage. I really wanted to like them, because I like their studio stuff, but they were just not that interesting live. Even with Count M’Butu and Derek Trucks joining them on stage, it was just… OK. Maybe it was that Derek Trucks is a tough act to follow. God knows I wouldn’t want to get up on stage following his slide guitar playing. Bottom line, Blues Traveler didn’t suck, they were just not as good as I had hoped they would be. A little bit of a let-down, but glad I got to see them and check them off the list.

Here are the setlists from each act.