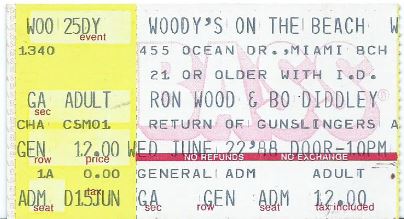 As I mentioned in my previous post about the first night of the two-night stand, my memories of the numerous shows I saw at Woody’s on the Beach are somewhat vague, but this night I remember well. Ron and Bo were particularly pumped and they broke into some classic Stones tunes, as well as some Faces. And while Ronnie Wood is not a great singer by any stretch, watching him sing “Honky Tonk Women” and mimicking the snorting of cocaine with his big nose while croaking out “She blew my nose and then she blew my mind” is a rock and roll image that is forever burned into my memory.

The Faces medley was also quite an experience for me. The first concert I ever attended was Rod Stewart and the Faces, way back when (unfortunately, I do not have that stub). So seeing Ron jam on these tunes connected me with my concert christening.

Finally, the gunslingers closed the show with a smokin’ version of “Hey! Bo Diddley.” I could not think of a better song to wrap up two nights of rock, rhythm and blues.

Here is the full setlist.

Woody’s on the Beach may have been one of the coolest music clubs ever. Owned by Ron Wood (guitarist for the Rolling Stones and the Faces), it was a place where you could see amazing artists in an intimate setting, and you never knew who might show up.

Ronnie would frequently perform there with special guests, and Bo Diddley was somewhat of a regular. I tried to catch them together whenever they played. This particular instance, they were performing two nights, so I bought tickets to both shows.

Because Woody’s was a nightclub and the performances generally started late in the evening, many of the shows became a little fuzzy. But I have a clear memory of Ron and Bo on stage together, trading licks and basically having a great time.

Thanks to the wonders of the internet, I was able to locate the setlist from this show. Check it out, and be sure to check back for my somewhat less fuzzy memories of the second night!