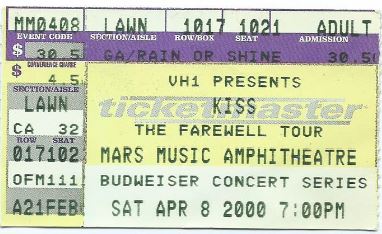 This ticket stub is from KISS’s “Farewell Tour.” Umm, farewell to your money, maybe. They have certainly continued playing since then.

Anyway, I went with my friend Jim and I was pretty psyched to see KISS. I had never seen them and I had always heard they put on a killer stage show. Plus, it was a big outdoor thing with other bands I had not seen.

The first act to perform was Skid Row. My expectations were not high for this act, let me tell you. Although I love glam rock, the 80’s hair bands just never did anything for me. But I saw them, so check that one off the list.

Next act was Ted Nugent. Yes, I know, he is a most abrasive and unsavory person and not someone I would ever spend a penny on to see by himself, but I figured if it is thrown in for free, what the hell. And the truth is, he was really good live. If he would just play guitar and not talk, the world would be a better place. Wasn’t it Frank Zappa who said “Shut up and play your guitar”? Bottom line, for an opening act, he was good. At least you knew the songs and the energy was there.

Then it was time for KISS. Total spectacle! They were lowered onto the stage on this huge platform and kicked the show off with “Detroit Rock City.” Smokin! The concert was really heavy on the older, classic stuff. They even played some choice nuggets like “Strutter” and “Firehouse.”

The stage show was everything you’d expect. The pseudo-Ace’s guitar smoking and catching fire before floating into the air and exploding. Gene Simmons spit blood and breathed fire. Paul Stanley got the crowd roused and swaggered in his platform heels. It was over-the-top, glam rock pageantry at its finest. When it was over, I could not think of a single song I wanted to hear that they hadn’t played. A most satisfying concert.

I have had other opportunities to see KISS, but the tickets were high-dollar and I couldn’t image them being any better than when I saw them.

So don’t forget kiddies: “Rock and roll all nite, and party every day!”

I’ve always kind of wanted to see GWAR, just because I have never been one to shy away from the bizarre. So when I saw that they were coming to the Orange Peel, with their new female lead singer Vulvatron, I had to reach out to my friends to see if anyone had the courage to go see them. Thankfully, my good friend Bill rose to the occasion.

Bill has a great music blog, Musoscribe,  so he gets passes to shows and sometimes gets to interview the artists. He said he would reach out to the promoter to see about getting us some comp tickets for the show. His email to the promoter, and the promoter’s response, are classic. I saved the email, so here is the exact verbiage:

Bill: One of my best friends assures me that I haven’t lived until I’ve seen the spectacle that is GWAR. They’re coming here to Asheville (The Orange Peel, mere blocks from my house) on Wed 12/3. If you’ll set me up with a show pass +1 (and – shudder – photo privileges if they’re allowed) I’ll review the show on the Musoscribe blog. Let me know. Thanks!

Promoter: God damn right you haven’t. I will put you on for 2 tickets and a photo pass. It’s first 3 songs, no flash. The other rule is duck and cover, and probably cover your equipment with plastic.

Because we knew that the band is known for their liberal spraying of fake blood and gore over the audience, we figured it would be prudent to go to Goodwill and purchase some throw-away white clothes. So with our old clothes, wallets and phones safely stowed in ziploc bags, we willingly entered the hellish realm of GWAR.

It was over the top! Words cannot adequately convey the image of Vulvatron spraying copious amounts of fake blood from her oversized prosthetic breasts onto a sea of crazed rockers. It was a spectacle most bizarre in nature. And yes, although I stayed more to the side, I did get hit a few times with the liquid gore.

GWAR is definitely not for the timid, but if you have a morbid sense of humor and appreciate over-the-top entertainment, then they are worth checking out. If you do, wear a white tee shirt, then you will leave with a one-of-a-kind tye-dye.