So I have to confess that this concert was a little disappointing. I am a big Jethro Tull fan, and the first time I saw them they were AWESOME. For this reason, I had very high expectations, especially seeing them in a smaller venue like the Sunrise Musical Theatre, as opposed to an arena like when I first saw Tull.

My wife and I went to this show with my friend Stewart and his girlfriend. We had fairly good seats, although there were no bad seats in the Sunrise.

I was pumped when Tull took the stage, but my excitement waned, and then I found myself thinking that I should be enjoying the show much more than I was, and finally realizing that they were just dragging through the performance. The contrast to seeing Jethro Tull in the 70’s was stark. As I watched them plod through their songs, I was forced to remember a scathing review I had read about the band in a rock magazine, where the writer referred to them as “Jethro Dull.” Sadly, that about summed up this concert for me.

Stewart seemed to have enjoyed the show, so I played along and said I thought it was good. I didn’t want to spoil someone else’s musical experience. And honestly, there were a couple songs that got me pumped, particularly “Living in the Past” and “The Whistler.” But mostly, it was weak. Even “Locomotive Breath” lacked steam.

Anyway, that’s the thing with a live performance—sometimes it’s great, and sometimes not so much. Here’s the setlist…

I’m pretty sure this was my first concert after moving to Asheville, although I might have seen Moe Tucker from the Velvet Underground first (I don’t have a stub from that show and I can’t recall when it was). Anyway, I’ve always been a Tull fan, so I figured I had to go and see them again. I hate to say it, but I was disappointed.

Having seen Jethro Tull in the late 70s, it was tough to live up to that experience. Even so, this performance was just downright sad, in my opinion.

I went by myself, since funds were tight at that time and my wife opted to pass. So I was very focused on the band’s playing, which seemed to lack enthusiasm, especially on the standards. It was almost like, “Yeah, here’s your Cross-Eyed Mary.” There were a few exceptions, most notably was “Pibroch (Cap in Hand),” which I thought was great. Martin Barre’s guitar work on that one was phenomenal. But by the time the show was over, I was yawning. As I exited alone, I recalled an article I had read years back that criticized Tull and called them Jethro Dull. I felt a little sad that the creative and powerful prog rockers that were such a huge part of my musical upbringing had lost their edge. It happens.

I would go on to see Ian Anderson solo, and Martin Barre solo too after this, and I really enjoyed both of those. If the band reunited, I’d consider seeing them again, just on the hope that they might rekindle their earlier spark.

Here’s the setlist from the show.

I’m a long-time Jethro Tull fan, and grew up listening to Tull, so when I saw that Ian Anderson was coming to town to perform “Thick as a Brick: Parts 1 and 2” in their entirety, there was not even a question of whether I would go or not. I purchased tickets for my wife and I, and began to familiarize myself with the new “Thick as a Brick: Pt 2” that had just been released. It is good, but alas, not as good as the first one—it’s tough to match a masterpiece.

We had good seats, orchestra center, and the venue was nice and intimate. Ian came out with his band and broke right into the classic first album of TaaB. I was basically mesmerized. Ian did not sing the whole time; he had a young singer with him who filled in on the more challenging vocal parts. I thought this was a good move on Ian’s part. I’m pretty sure he suffers from hearing loss and struggles with some of the vocal parts.

But his flute playing, still phenomenal! He was flamboyant and animated every time he raised that flute to his chin. There is no one in the world who rocks the flute like he does.

After part 1, there was an intermission before part 2. During the intermission, there was a humorous shadow performance which served as a Public Service Announcement, encouraging men to get checked for prostate cancer. Something us old rockers gotta do!

Part 2 was great, but again, I love the original TaaB, so it was not quite as moving for me as the first half.

For an encore, they performed “Locomotive Breath.” Perfect song to close the night!

Overall, this was a great show, better in fact than the last time I saw Tull, in my humble opinion. The only thing lacking was it would have been cool if Martin Barre was on guitar (I do love Martin’s playing). But the guitarist Ian had was no slouch. Left totally happy.

Martin Barre is the guitarist from Jethro Tull, and since Tull is on an extended hiatus, he is performing solo with a backing band.

I had planned to go to this concert with my youngest daughter, who really likes Jethro Tull (proof I’ve raised my kids right), but she was unfortunately sick and could not muster the strength to go, so my friend Dan acquired my extra, and he and his significant other Angie joined me for the show.

First, I want to say that at 70 years old, Martin is as great of a guitarist as he was when I saw Jethro Tull for the first time in the late 70’s. His technical performance, tone, and energy were those of someone half his age. There was also a maturity in his playing, and I mean that in only the best sense of the word.

There was no opening act, and the band played two sets and an encore. Early in the first set, they played “Minstrel in the Gallery,” probably my favorite Tull song. I have seen Tull three times and the only time they played “Minstrel” was as an encore the first time I saw them, so hearing Martin and his band play it was amazing for me. After the song, I told Dan I could leave now and be happy. But I’m glad I stayed. The rest of the night was packed with incredible music, including an abundance of Tull songs and some really nice cover tunes (see setlist below).

After the show, I went out to my car and grabbed my record cover of “Minstrel in the Gallery,” which I brought with me in the hopes of getting autographed. I waited around with the other old rockers (a reference to a Tull song here) and after a short while, Martin came out to sign autographs. When it was my turn to meet him, I told him that I had attended a guitar clinic that he hosted at Ace Music in Miami many years ago. He clearly remembered the clinic and shared his memories of staying at the Fontainebleau Hotel. He was really pleasant and friendly, and I left feeling grateful to have met someone whose music was so inspiring to me throughout my life.

Here is the setlist, and remember, you’re never too old to rock and roll if you’re too young to die. 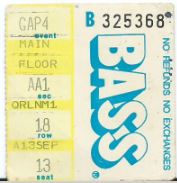 This is a pretty sad stub. The concert was amazing, but I was quite upset that the gatekeeper gave me the short stub. I even said something to the guy, but he was a real asshole about it and refused to let me have the better half. As such, I had to do some digging online to find the actual date of the concert, which was part of the Stormwatch tour. It seems that they played two nights at the Sportatorium. I’m not sure which was the one I attended.

Anyway, the concert was awesome! I was a huge Tull fan growing up. I have great memories of being in the woods in New York with my friends, listening to Songs from the Wood on a dinky cassette player. One of my earliest album purchases was Best of Jethro Tull, and I listened to it over and over and over. So getting to see Tull was a big deal for me.

The prog rock band U.K. opened the show. I was not that familiar with them at the time, but once I learned more about them, I felt fortunate to have gotten to see them live. The incarnation of the band I saw was the trio version which included singer/bassist John Wetton (from King Crimson, Roxy Music, and Uriah Heep), keyboardist/electric violinist Eddie Jobson (Roxy Music and Frank Zappa’s band), and drummer Terry Bozzio (from Frank Zappa’s band). I didn’t know any of their music, but damn – I was really impressed with their performance.

Then Tull took the stage. The entire band was out, sans Ian Anderson. There was a stand in the center of the stage holding his flute. Suddenly, a pirate-looking figure swung from one side of the Sporto on a rope to the other, swung back, and on the next swing, let go, slid across the stage and swooped up his flute. I was completely blown away! They played five songs from the new album, after which Ian said, “Well, we’ve played some new stuff, now the rest of the evening will be all older material. This song starts out loud, then gets soft, then gets loud, then gets soft, then gets loud again. I think you know the rest…” and they blasted into “Aqualung.” The crowd exploded. And true to his word, the rest of the show was all classic tunes, which included “Songs from the Wood,” “Thick as a Brick,” “Too Old to Rock and Roll,” and “Cross-eyed Mary.” And just when I thought it could get no better: the encore!! They came back, played Minstrel in the Gallery > Locomotive Breath > Dambusters March > Minstrel in the Gallery (reprise). To this day, that holds up as one of the best encores I’ve ever seen.

I would go on and see Jethro Tull other times in my life, but none of the subsequent shows ever lived up to this one. It was by far the best Tull show I have seen, and up there with some of the best concerts overall.