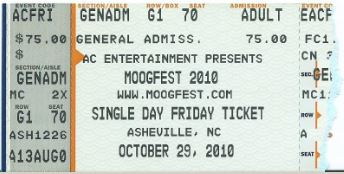 This stub was from the first MoogFest held in Asheville, NC. I went with my wife and our older daughter, who was very excited that MGMT was performing. I was unfamiliar with MGMT, but my daughter gave me some of their music to listen to, and it was very cool. Anyway, we got tickets only for the first night of the three-day festival.

There were more bands playing than we had the opportunity to see, and of the ones we did see, some of them we only caught part of their sets, since the festival was taking place at multiple venues (Civic Center, Thomas Wolfe Auditorium, Orange Peel). Of the bands that performed on the Friday night, these are the ones we got to see:

Couple things to note. One of members of DEVO had a death in the family and could not attend, so the remaining members performed with Octopus Project, which was cool. Big Boi we only caught a couple songs. MGMT was definitely the high point. We went up fairly close (they were playing in the Civic Center). It was general admission with an open floor, so lots of freaks dancing to the music. My daughter had a friend with her, and the two of them were psyched. It made my wife and me very happy to be there and to see them having so much fun. Live music is such a great bonding experience.

At the time, I was not a huge fan of electronic music and hip hop, but I really enjoyed the energy and the light shows were mind-boggling. I made a promise to myself that next year, I would go all three days. And I kept that promise to myself. I’ll try to dig up my stub from that show and post on it soon.

This was the final MoogFest held in Asheville, which is sad because Asheville was home to the late music innovator, Bob Moog, inventor of the famous Moog Synthesizer. The Moog factory is still here, and every Moog instrument—synthesizer, theremin, and effects pedal—is designed and manufactured right here. So even though this lineup was weak compared to the previous festivals, I went anyway, and did get to see some cool performances that I would never have seen otherwise.

MoogFest is a showcase of electronic music, and has performers from many genres, everything from prog to rap to new wave to DJs. It is really a big celebration of creativity and technology in music. In addition to performances, there were workshops and discussions and exhibits, everything to make a music-nerd’s heart skip beats.

So here are the acts that I recall seeing:

Primus was disappointing. I’m not a Primus fan, but had hoped for a cool show based upon all the hype, but they were barely mediocre. The high points were definitely Santigold, Thomas Dolby, Divine Fits, Miike Snow, and Morton Subotnick. They were all excellent.

I was only able to find a few setlists online, so here they are. 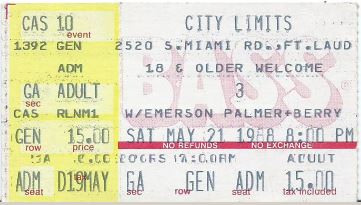 I was (and still am) a huge ELP fan, so when I heard that the band 3, featuring Keith Emerson and Carl Palmer, were playing a nightclub in Fort Lauderdale, I immediately scored a ticket.

I don’t remember with whom I went with, but I remember the scene and the show itself most vividly. City Limits nightclub was jam packed, almost to the point of being really uncomfortable. But I was not to be deterred. I squeezed myself into a space where I had a good view of the stage, and especially Keith’s infamous Moog synthesizer.

I had seen Emerson, Lake & Powell a couple years prior, but seeing Carl Palmer pounding away was a treat indeed. And Keith’s playing was mind-blowing. I can still see him twisting knobs and pulling and inserting plugs during “Hoedown,” and laying on top of his grand piano, playing classical piano backwards. All the while, Carl pounding away with a precision that is unrivaled. I was not familiar with Robert Berry, but he was no slouch.

The band broke up after this tour (the only tour they did, I believe). I feel pretty fortunate to have been able to see them. Here’s the setlist.

I bought tickets to this concert intending to take my daughter. I had seen STS9 (short for Sound Tribe Sector 9) some years back at MoogFest, and they were pretty cool. They had a great light show, so I figured it would be a fun father/daughter thing to go to see them together.

Alas, my daughter got sick and was not up for going to the show. I called around to see if anyone wanted the extra ticket, and my friend Arwen jumped on the opportunity, saying she was planning to buy a ticket at the box office anyway. This made me happy, because Arwen is a good friend who I enjoy going to concerts with, and she had given me a free ticket to a concert not too long ago, so I felt good about being able to reciprocate the favor.

I met Arwen outside the US Cellular Center, along with two of her friends, Rich and Laurie. Since it was a general admission show, we were able to go in and get seats together. We were right up front and center, so we were pretty psyched about it.

The show started late, after 9:00, and the first thing that struck me was the overwhelmingly loud bass. It felt like I was getting punched in the chest. The rest of the band sounded great, and the light show was phenomenal, but that damn bass! I’m not one who is prone to complain about music being too loud, but this was one of those instances where it was just too much.

During the first set, someone inflated a few balloons and sent them into the air to be tapped around. I like balloons. They add to a festive feeling at a concert, and they don’t hurt if one hits you in the head, unlike a Frisbee. Anyway, one of the balloons reached a person in the row behind me, and he angrily grabbed the balloon and popped it. I then heard him ranting to his friend about how the band has a multi-million-dollar light show and these fucking balloons are ruining it. I was kind of taken aback by this comment,  and when I shared it with Arwen, she astutely said that if the light show is a multi-million-dollar show, then a couple balloons should not affect it.

It was around midnight when the second set started, and by that time, we were all feeling a tired. I for one felt like I had my fill. There is only so much instrumental electronic music that I can handle. So when the group said they were ready to go, I happily accompanied them out early. I couldn’t imagine that there was anything else that I would be missing, just more lights and loud bass.

Glad I went to see them as a headliner, but don’t think I will be seeing them again.