This was the last night of a three-night run of Dead shows. The previous night’s show was excellent, and my friends and I all crashed and slept late.

After waking up and having a late breakfast, I convinced Armando and Tim to join me on an excursion to the Dali Museum in St. Petersburg. Immersing ourselves in surreal artwork seemed like a good way to prepare ourselves for the third Dead show.

The museum was very cool, and we were not the only Deadheads who had the idea of checking out the Dali Museum. There were many tie-dyed freaks wandering around, gazing glassy-eyed at the many artworks that were on display. Two in particular stood out for me. There was a hologram of Alice Cooper wearing a tiara, which was very cool, especially since I am such a big Cooper fan. But without question, it was the massive painting entitled The Hallucinogenic Toreador that was the most captivating. I stood for what seemed like an eternity, getting lost in the psychedelic colors that pulsated on the canvas. Here is a link to an image of the painting to provide a sense of context.

After the museum, we made our way back to the Bayfront Center and hung out with the other intrepid music fans until show time. It was decided amongst us that we would drive back to Miami after the show. I was not too keen on this idea and felt it would be better to spend the night in St. Pete and drive back early in the morning, but Armando was adamant that he had to leave tonight to be in Miami in time for work in the morning, so I acquiesced since he said he would be the designated driver.

This particular evening was Bob Weir’s birthday, and as expected, the show was stellar. Our seats were not as good as the first night in St. Pete, but since the venue was so small, it really didn’t matter. The second set was especially hot, with Phil opening the set with “Box of Rain.” The set also included “Terrapin Station,” one of my favorites, and “Morning Dew” to close, followed by “Quinn the Eskimo” for an encore. If you are at all interested, the full concert is available on YouTube, with actual video from the show and not just pictures.

Anyway, after the show, we skipped hanging out because Armando was eager to get on the road. We were facing a good five-hour drive, which would get us in to Miami close to 4:00 am. Once we were on I-75 southbound, Tim stretched out in the back seat and fell asleep, while I sat up front with Armando and had the important task of keeping the music going. But eventually, the hypnotic lines on the road got the best of me and I leaned my head against the window and slipped into slumber. I was ripped from my sleep by the sound of Tim screaming as the car was bouncing and careening off the road. Everything was a blur as I waited for the inevitable crash, but somehow, Armando miraculously got the car back on the road without us hitting anything. Tim was yelling from the back seat, and Armando was apologizing that he fell asleep. At this point, we were all wide awake with the collective adrenaline rush, but after a while, the rush was replaced by a deeper fatigue brought on by the adrenaline crash. This time, Armando consented to our suggestion that we pull over at a rest area and sleep a bit in the car. We cracked the windows and sank into some much-needed sleep.

When we awoke, we were all groggy, but rested enough to make the remainder of the drive. We rolled in to Miami around 8:00, which wasn’t bad, all things considered. It was a long, strange trip, which could have ended in disaster, but the four winds blew us safely home again.

The day after seeing the Dead at the Hollywood Sporatorium, we set out in the rented RV to see them at the USF Sun Dome in Tampa. The drive there was relatively uneventful and we took turns napping. We arrived with plenty of time to entertain ourselves in the parking lot before going in to see the show.

The concert was amazing, and since this was my first time seeing consecutive Dead shows, I was really impressed at the complete diversity between shows, this one being entirely different from the previous night. It was almost like seeing one long two-day concert. Anyway, I’ve included the setlist below. High points for me were “Gimme Some Lovin’” opener, “China Cat Sunflower > I Know You Rider,” “One More Saturday Night” to close the second set, and an incredible version of “In the Midnight Hour” as the encore.

After the concert, we drove a little bit until we found a campsite where we could park the RV overnight. We were still wound up from the concert, so we sat inside the RV and talked late into the night. One of the guys who was with us (a friend of my co-worker Tom), I found out later was a professional stand-up comedian, which explains why he had us laughing uncontrollably for hours. I distinctly remember laughing to the point where tears were streaming down my face and I had a stitch in my side like I had just run several laps.

The next morning, we started our drive back to Miami. I was designated driver for most of the drive while others slept in the back. I was OK with that, listening to cassette tapes while I cruised along the flat Florida highway. But after a while, I noticed the temperature gauge climbing into the red zone. I called to the folks in the back, but no one responded, so I threw a soda can and beaned someone in the head. After a quick huddle, we decided to pull off and deal with the situation. It took a while to cool the engine down, and then we went to a gas station and added more water to the radiator. This did the trick, and I just made sure to drive a little slower the rest of the journey home.

In the Midnight Hour 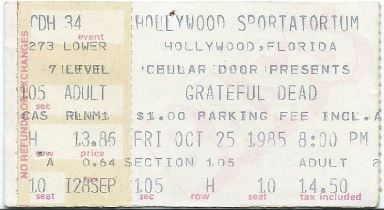 This concert has a couple special memories associated with it. To start with, it was the first time I saw the Dead perform “Morning Dew,” which is still one of my all-time favorite Grateful Dead songs. Second, while this was not my first time seeing the Dead, it does mark the first time that I took a road trip to see the Dead. So while this particular show was a “home” show, I was traveling with a few people to Tampa the next day in a rented RV to see the Dead again. So this was essentially the beginning of what would be a long, strange trip indeed.

I went with my girlfriend Lisa, a friend from work, and some other people I really didn’t know. We all chipped in money and rented an RV, which was pretty comfortable. We parked it in the field which served as the parking lot for the Sportatorium and went around buying shirts and stuff from the various parking lot vendors.

The band sounded great! I had a cassette tape from this show and I used to listen to it a lot, remembering the nuances of the show. There were no weak spots, and the “Morning Dew” to open the second set was phenomenal.

After the show, we parked the RV at my friend’s house. Lisa and I slept in the RV and others slept in the house. In the morning, we heading on down the road to the next show at the USF Sun Dome, but that’s another stub and another story.

Here’s the setlist from the Sportatorium show.

It’s All Over Now, Baby Blue