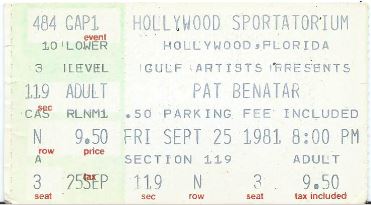 Back in 1981, Pat Benatar was definitely one of the top women of rock. Not only did her songs rock, but they were really empowering for young women, which was a great thing in my opinion.

I don’t recall with whom I went to this concert, but I do have a clear memory of her on stage. The first thing that struck me was that she was quite short. For some reason, she seemed taller in the MTV videos. But regardless of stature, she was pure energy on stage. I recall being amazed at the level of power which she projected.

I wish I had more to share about this show. I looked at a few setlists from that tour, and this was pretty much the standard one. As I read it, I recalled “Helter Skelter,” which I had forgotten. It’s great when memories are rekindled.