So I have finally found out what all the excitement is about, and went to see Hamilton.

My wife and daughter were watching the parade on Thanksgiving morning, when a commercial came on advertising Hamilton in San Francisco, saying tickets were still available. My wife went online, and sure enough, we were able to get three tickets for the following day (we were not going to miss our shot!). The ticket prices were very reasonable, $99.00 each, which is way less than what I hear others have paid for tickets to a performance. The only down side was that the seats were not together, but we were in the same general area of the mezzanine, so that was fine.

While I’m not a huge fan of Broadway musicals, I do enjoy them, and this was definitely one of the better musicals I have seen. The songs were great, the story was engaging, and the stage was very cool. While I personally would not consider it to be $400-a-ticket good, it was well worth the hundred bucks a ticket we paid.

Since I’m not a theater critic, I don’t have much else to share. It was a cool show and I’m glad I went.

This was the first concert I had attended in a while. The past few months have been challenging: relocation issues and the passing of a loved one just a couple of the major things. As such, hitting concerts was not a priority. But things are settling a bit, so my wife and I decided to go see Trans-Siberian Orchestra at the SAP Center (affectionately called the Shark Tank since it’s home to the San Jose Sharks hockey team). I’d never seen them before and heard they put on a killer stage show, so I figured it would be worth checking them out.

We had lower level seats, pretty much straight back. I figured this would be a good spot to appreciate the lasers and pyrotechnics (I was correct in my assumption). The show started almost on time, and there was no opening act, just TSO.

So the first half of the show was Christmas Eve and Other Stories, and was comprised of about 15 songs, very much in the Christmas spirit. I have to say, if I’m being honest, I found it a little too hokey for my tastes. It was like being strapped in a chair and made to watch Hallmark Holiday Programming for an hour straight (note that Hallmark Channel sponsored the tour). My wife said it felt like being in a mega-church. So while there were some cool parts, overall, I was not impressed with the first half.

Thankfully, they redeemed themselves in the second half.

The second half was chock full of classical hits (Grieg, Mozart, Beethoven, etc.) amped up with wailing guitars reminiscent of Judas Priest. And the light show was mind-blowing! There was even a massive Tesla coil shooting out flames and bolts of electricity that crackled in time to the musical pieces.

So on the whole, I liked the show. I would even consider seeing them again, but only if it was not around the holidays. I would love to see a performance that was all hard rock interpretations of classical music. That kind of stuff brings out the prog rock fan in me.

Here are some pictures I snapped from the show, along with the setlist. Hope your holidays rock! 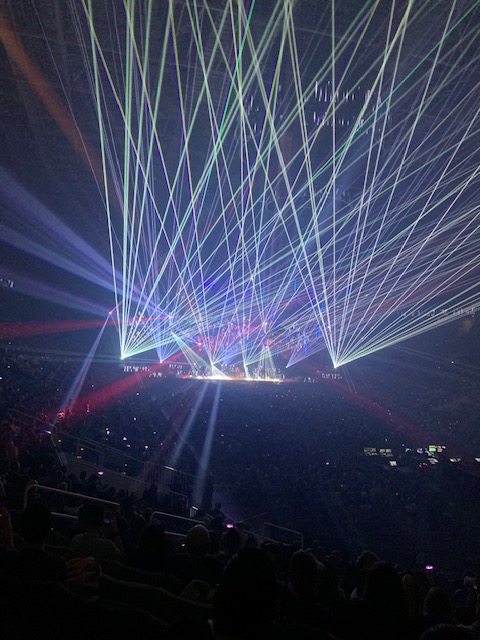 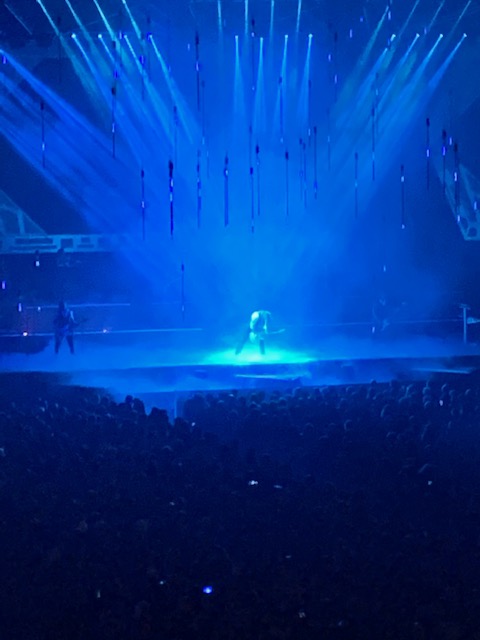 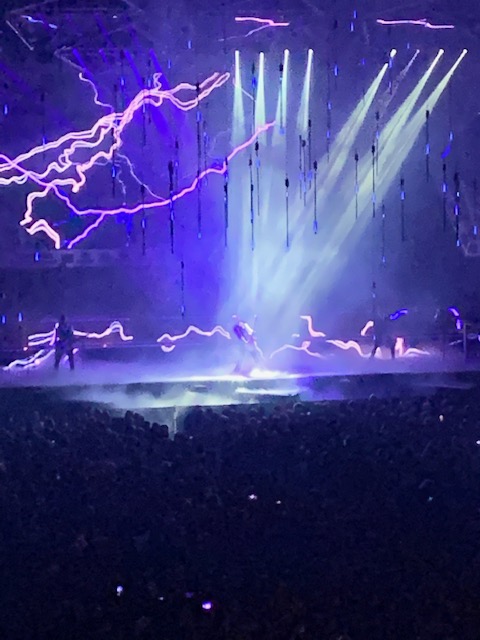 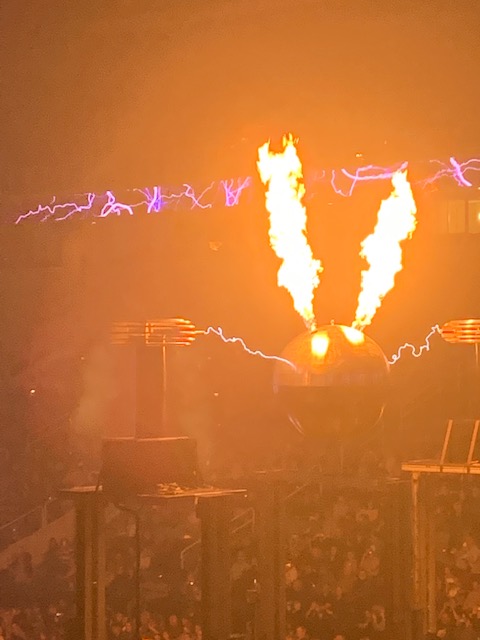 I bought these tickets to see The Raconteurs at the Fox Theater in Oakland before we moved out to California. My wife loves the band, and I really like them too. Actually, my favorite of all Jack White’s projects. So I scored tickets and the show promptly sold out. They added a second show, but there’s something that makes a sold out show just a little more special.

Anyway, we drove to Oakland, which took a while because of rush hour traffic, but we still made it in time to grab a bite to eat before the show. After dinner, we walked to the theater, which even from the outside looked really cool. 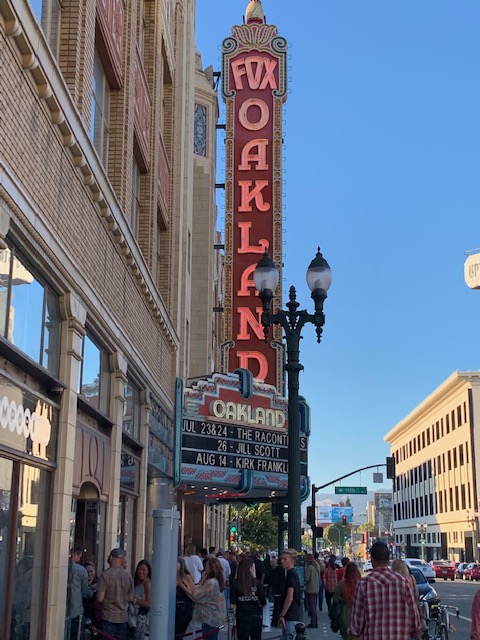 Now I have to say that the inside of the theater was even nicer, really beautiful and ornate. Unfortunately, this was a “no phones” show, and they were hard-core. Everyone had to put their phones into these hermetically sealed pouches that could only be opened upon exiting the venue. But, if you want, you can Google the venue and there are plenty of pictures online to give you a sense of the décor.

The opening act was an artist called Lillie Mae, who is someone Jack White produced. She and her band were awesome. Totally worth checking out. Cool alternative country vibe. My wife said that they sounded like a mix between Dixie Chicks and Mazzy Star, which was pretty accurate.

After a brief intermission, The Raconteurs took the stage. We had general admission floor tickets, so we were pretty close, and I was grateful that I brought earplugs, because they were quite loud. After so many concerts, I need to protect my hearing.

What can I say about the show? They totally rocked! It was all killer and no filler. High energy, great mix of old and new stuff. The only criticism I have is that it was kind of short. Including encore, they barely played for an hour and a half. For $85 a ticket, I feel like you should get at least two hours. But beside that, it was great.

Here’s the setlist. Rock on!

Some of you may have noticed that I have not posted in a while. That’s because I moved and am now a California dude. And what better way to get settled into a new state than by going to see a concert.

Electric Light Orchestra has been on my short list of bands I want to see but have not had the opportunity. I can now check them off the list. I managed to get tickets for my wife and I, which were cheap seats way in the back, but this actually worked out for the best, because the light show was mind-blowing.

Anyway, getting ahead of myself.

Dhani Harrison opened the show. If his name seems familiar, yes, he’s George Harrison’s son, and quite a good musician. His songs were cool and he had a unique sound, but his voice definitely sounded like his dad’s on a few songs. It was nice to have an opener who was actually good.

After a brief intermission, ELO took the stage. Wow! Incredible sound, even in a big arena. And the lights—mesmerizing. But what was most astonishing about the show was just how many hits they had. I recognized every song, and they played a long time. The band was comprised of multiple keyboardists, cellists, a violinist, and stellar backing vocals, so every song they played sounded spot on. Even “Xanadu,” my least favorite ELO tune, was cool.

Another treat was when Dhani Harrison joined ELO on stage and performed “Handle with Care” by the Traveling Wilburys. He nailed his dad’s part, and the vibe was just really good.

I’m looking forward to seeing a lot of shows here on the west coast. For now, here’s the setlist from this one. Rock on!